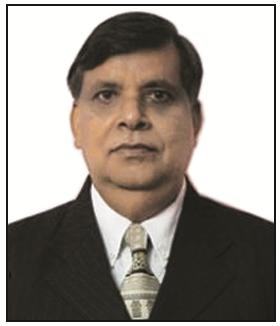 Prof. R. K. Sinha received M. Sc. degree in Physics from the Indian Institute of Technology (IIT), Kharagpur, India, in 1984, and Ph.D. degree in the area of Fiber Optics and Optical Communication Technology from the IIT, Delhi, India, in 1990. He had held various research and academic positions at Indian Institute of Science (IISc), Bangalore during 1991, Birla Institute of Technology and Science (BITS) Pilani during 1992-1994, REC (now NIT) Hamirpur H.P. during 1994-1998 and at Delhi College of Engineering-DCE, University of Delhi/ Delhi Technological University-DTU during December 1998 to till date. He is currently working as Professor of Applied Physics and Chief Coordinator of TIFAC-Center of Relevance and Excellence in Fiber Optics and Optical Communications (Mission REACH Program of Technology Vision 2020, Govt. of India) at Delhi Technological University Delhi since October 2002.

He is the author / co-author of over 350 research publications in the leading national and international journals (161) and conference proceedings (196), 06 Book chapters, 03 Books and originated 05 patents. He has supervised 18 Ph.D. thesis and 22 R&D projects sponsored from Government and Private Organizations.

Prof. Sinha is a Fulbright Scholar – recipient of Fulbright-Nehru Fellowship for acquiring firsthand knowledge of Higher Education Systems and Practices of USA covering over a dozen US universities and higher educational institution as an International Educational Administrator in 2013. He was Keynote Speaker in International Conference –NOPT in Singapore in February 2010. He has also been awarded (i) National Science Council Taiwan Fellowship- 2009 to pursue research in the area of Nano photonic Devices (ii) Indo Swiss Bilateral Research fellowship-2009 to initiate collaborative research in the area of Nano photonic Devices with EPFL Switzerland and DTU, Delhi, India (iii) Royal Academy of Engineering (U.K) Fellowship-2008 to carry out research on Photonic Crystal Waveguides and Devices at Glasgow University, UK (iv) the Japan Society for Promotion of Science (JSPS) Invited Fellowship- 2007 to carryout research work on Multicore Photonic Crystal Fibers at Hokkaido University, Sapporo, Japan (v) Prof. Sinha is awarded UKIERI fellowship from British Council of India to initiate collaborative research between leading universities of UK and his organization in the year 2006 (vi) He was academic visitor of Stanford University in 2002 and academic visitor of MIT, Harvard and Boston University in 2005 (vii) ICTP-Visiting Scientist fellowship-1991 at ICTP Trieste, Italy, IROST Fellowship 1992 and Visiting Scientist position at University of Campinas in Brazil in 1995 (viii) a recipient of Japanese Govt. Scholarship in 1989- 1991 to carry out research at Osaka and Kobe University in Japan.

He is a Fellow of SPIE- The International Society of Optical Engineering, Fellow of the IETE (India), and a Fellow of Optical Society of India, a member of the Optical Society (OSA, USA), a member of IEEE and a Member of The Photonics Society, IEEE. Professor Sinha is also Faculty Adviser of SPIE-DCE Chapter and OSA- DCE Chapter at DTU, Delhi. In addition, Professor Sinha has been actively involved in supervising several innovative projects on the design and development of unmanned and autonomous vehicles and in the establishment of Knowledge and Innovation Park with focus on student led innovation and product development. He has successfully mentored technology development and technology transfer of 39 technologies for Commercialisation to industries and over 25 MoUs during his stint as Director, CSIR-CSIO Chandigarh.